HELPS TO ACHIEVE AND MAINTAIN ERECTION

At the same time, it is believed that in addition to alleviating erectile disorders, African Plum can help men to achieve and maintain erection, as well as improve libido. This may be due to the presence of active ingredients such as terpenes, n-docosanol and beta sitosterol in African Plum tree bark extract.

African Plum extract helps to reduce the enlarged prostate and thus alleviates a number of problems with urination (painful urination, incomplete bladder emptying, emptying, emptying drop by drop, as well as weak and intermittent urine flow). These problems pose a serious obstacle to sexual enjoyment so any substance that provides relief from such ailments indirectly acts as an aphrodisiac.

Since the beginning of human civilization, to this day there are certain substances known to increase sexual desire and improve the quality of the sexual experience. For centuries, African Plum was used as an aphrodisiac among the tribes of South Africa. It was not until the arrival of colonialism and discovery of traditional medicinal plants that African Plum began to be used in Europe.

The most important application of African Plum for men is to treat benign prostate hyperplasia (prostate enlargement). An enlarged prostate hinders urination in men and causes other unpleasant symptoms (also compromising sexual potency). In conventional medicine, prostate enlargement is treated by surgery or medicines. In the first case, part of the enlarged prostate is removed and the normal flow of urine is thus restored. However, this also involves the removal of certain nerves that pass through the prostate, and play a role in sexual stimulation. Medicines used to reduce the enlarged prostate can in certain cases also have undesirable effects such as erectile or sexual dysfunction.

On the other hand, herbal supplements such as African Plum can prove to be just as useful in reducing the discomfort accompanying prostate enlargement, but without undesirable effects on male libido. 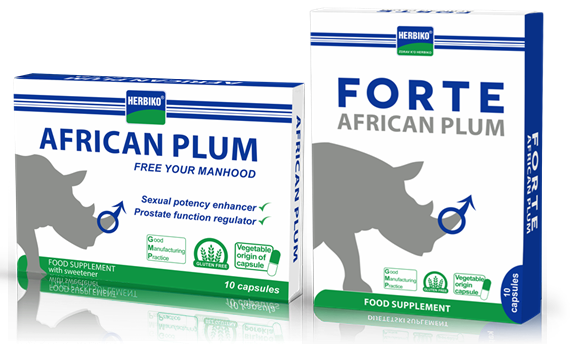 Does prostate enlargement cause impotence?

A study performed in America and six European countries on approximately 14,000 men, aged 50 to 80 years, demonstrated a strong link between benign prostatic hyperplasia and urinary problems or erectile dysfunction. 50% of all subjects reported sexual function difficulties, and 10% complete impotence.